Russell Brand to miss SxSW Keynote with Brain Solis. My thoughts & why I care. 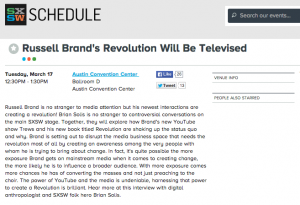 Although I am very disappointed that Russell Brand will not be attending SXSW I support his decision. Who cares what I think? Well, because I conceived and coordinated the “Russell Brand’s Revolution Will Be Televised” interview with Brian Solis at SXSW in the first place many many people have been asking me….

My reasons for wanting Russell at SXSW to talk about Revolution were altruistic in nature, I wanted his current message to reach even more people. I watch The Trews almost daily and am sometimes in awe of his his uncanny ability to take really serious issues, explain the source of conflict, expose some truths, make us think and of course make us laugh.

I should note that I reached out to Russell directly with the idea to talk at SXSW well before I knew there was a film.  Things seemed to line up perfectly, I asked Brian Solis who was exited about it, I got his contact info from a friend and then I randomly ended up in his LA based Yoga class (which I had no prior knowledge of his involvement there). I know this is what Jung calls synchronicity and it happens to me often when things are supposed to happen. I put a lot of thought into the subject matter and had it all spelled out. Russell agreed to it immediately and we were off… fast forward to his announcement today.

When Russell called me to tell me why he was not coming (and yes he actually called me because our correspondence had been direct and he is a stand up gentlemen behind that wacky persona), I understood his dilemma completely. He was finding it difficult to watch the film that was also premiering in Austin and although what we had setup had nothing to do with it, it was connected by circumstance. I understand because on a more personal level I share his journey of recovery and desire for self realization – the goal being to go from an empty self centered person using drugs and alcohol to fill the void, to a self aware person integrating love and spiritual principals to feel connected to humanity. I can’t imagine sitting through a movie of myself during such a journey and his is a million times more intense and public.

Yes, I am disappointed, but ultimately I support Russell and his evolution to revolution.

Thank you to Nik Linnen, Brian Solis and Jessica Cox at SXSW for everything.

Some time ago when I was a newly recovering junkie sinking my teeth into succulent transatlantic fame we were contacted by a respected filmmaker who asked if I’d like to make a documentary about happiness and I leapt, ego first into a caper that would take 7 years and as many directors to complete.

Due primarily to my loopy truculence the process quickly got a bit muddled and we parted ways and I stumbled on with the project enlisting a series of different directors and producers, some of whom were dear friends, others were Oscar winners (all were good people) to do the real graft. It was chaos; we ended up in US Marine training camps, Louisiana penitentiaries, Occupy protests and backstage at MTV award shows with the world’s biggest stars.

Over the sprawling time period in which we’d been in production I’d transitioned from an attention-seeking missile, exploding into exhibitionism at every turn, into a man who, whilst still a show-off, was becoming disillusioned and disconnected from fame, celebrity and all it’s sticky ephemera.

When it was suggested that Ondi Timoner, the highly respected filmmaker who directed one of my favorite docs, “Dig!” take over the project I was relieved – as were the film’s, by now understandably anxious backers.

I let go of my mad ambition to direct and star in what had become a shambles and handed the reigns over to Ondi, who wanted creative control and to make a documentary about me and my transition from a relatively conventional celebrity to whatever the hell it is I am now.

Ondi is a very beautiful person and a director of peerless integrity, I suppose what I didn’t consider was that in letting go of the film, I was agreeing to be the subject of a biography. Posthumously this is a great honor but while you’re alive, oddly intrusive and melancholy.

You’d think a narcissist would like nothing more than talking about themselves and their “rags to riches”, “hard luck” story but actually, it felt like, to me, my life was hard enough the first time round and going through it again was painful and sad.

I know Ondi is an artist and I’m told the film is good but for me watching it was very uncomfortable.

I apologise sincerely to the organisers of sxsw for my non-attendance, especially Janet Pierson, Brian Solis and Rynda Laurel from the interactive festival who were responsible for the keynote talk that I was due to do.